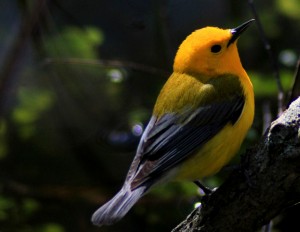 I am arbitrarily interrupting my posts from my trip to South Texas to present the results of more of my amateur research from the data at eBird.  If you are not logging your sightings into eBird, 2013 would be a great time to start.  It is easy to do and is fun.  For me, it was this tinkering around with data that got me hooked on eBird.  It opened my eyes to a whole new world of data on a very wide scale.  Besides, if you think about it for very long, you should come to the conclusion that if you care about birds, you should be reporting your sightings to science.  This is our Citizen Science project. (and here you thought your Science Fair project in high school would be your last).

Ok.  Enough of that.  What kind of data has Greg been digging into?  Well.  More about Ohio birds.  Earlier, I posted a couple lists of species of all the bird species reported to eBird and listed each with their peak week of abundance.  What’s that?  Abundance here is the same definition as used in eBird for their bar charts–it is actually the frequency of checklists.  For instance, if birders submitted 100 checklists to eBird and 38 of those checklists had one or more sightings of Turkey Vulture, then it would get a value of 0.38 or 38% of checklists.  If 100 checklists were submitted and only 1 checklist had a sighting of a Connecticut Warbler, then the frequency of checklists would be 1%.  This data is recorded in eBird by week.  They have set each months to have 4 weeks (week 1=1st thru 7th, week 2=8th thru 15th, week 3=16th thru 21st, and week 4=22nd thru end of month).  So in eBird, 48 “weeks” make up the year.  Wouldn’t it be grand to know what week of the year would give you the best chance to see a certain species?  Well, your friendly neighborhood number cruncher has come up with a method to show you that, species-by-species for all of Ohio.  That data is already posted on this sight under the Birders Notebook tab.

Rather than print the exact percent of checklists, I have chosen to use ranges as categories:

In other words, if you went to a random location in Ohio and birded there during the specified week, it would take you roughly 2 stops to see a Very likely bird.  It might take you 3 or 4 stops to see a bird ranked Probably.  Of course, the better you know Ohio habitat, you could really increase your chances.

What exactly is “Peak Week”?  That is something that yours truly has conjured up himself.  It is the week out of the year in which the abundance is at its highest for a single species.  It is the week (at least according to eBird data) that would give you the greatest probability of seeing that species.  Is that the *only* week you can see that species?  Absolutely not.  Ohio has many permanent residents–birds that are found every week of the year.  This chart merely extracts the week in which the species is reported on the highest percentage of checklists that were submitted.

To improve on my earlier work, I wanted to not only show the best week out of the year to see a species in Ohio, but also *where* was the best location.  Unfortunately, there is not enough data yet at the site level to do this for a specific birding spot.  There is not even enough data to do it at the county level.  There are a handful of counties where there is very little data submitted to eBird.  So the next best thing is breaking Ohio into regions.  I have broken Ohio into 9 regions (3 in the North, 3 in the middle, and 3 in the South).  The breakdown looks like this: 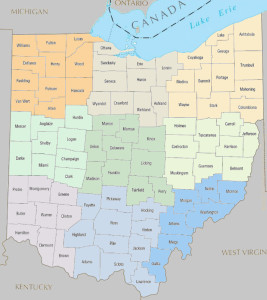 I did not break this up using physiographic regions.  Rather, I tried to split up the state into roughly equal sections.  This map loosely uses I-75 and I-77 as North-South delineations and State Route 30 and I-70 as East-West lines of demarcation.  So for my list, I wanted to know which region was best for a species as well as which week was best.

Finally, here is the list of Ohio bird species, listed by month (01 thru 12), and by week within each month.  Within each week, all the species peaking then are listed at the detail level by descending abundance (the ones at the top will be more common than the ones listed last for each week).  More Texas photos will be forthcoming.  For now, enjoy some data.

Peak Week of Species in Ohio by 9 Regions