Yesterday morning (3/31/2011) I found some tracks in the snow on the sidewalk in front of my house. 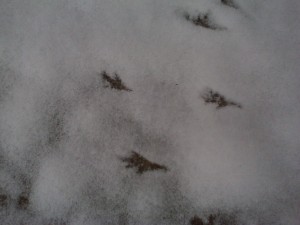 Haha!  You say you don’t have much information to go on?  Like size.  Are these tiny tracks, medium tracks, or large tracks?  What if I didn’t tell you?  There were more tracks in the snow that are not in this picture.  Am I being evil here?  Yes.  A little.

So I live in Northeastern Ohio.  It’s the last day of March.  And this bird was on the sidewalk in front of my house in about 1-1.5 inches of snow.  Arrrrgh.  These hints aren’t helping you much?  Some of you probably already know and are saying to yourselves, “DUH” (of Charlie Sheen proportions)!  Hahaha!

Ok.  The front yard is very small.  There are some trimmed hedges and a medium sized pear tree (I think) in the adjacent neighbor’s yard.  Oh, and I live in a small town.  Birds that are very common in the vicinity include House Sparrow, American Robin, and Mourning Dove.  Birds that show up with some frequency are Northern Cardinal, Song Sparrow, Carolina Chickadee, Eastern Bluebird, White-breasted Nuthatch, Blue  Jay, and European Starling.  Birds that are infrequently seen from my front yard  include American Crow, Wild Turkey, Cooper’s Hawk, Turkey Vulture, Red-tailed Hawk, and Red-eyed Vireo.

Uh-oh.  I gave you too many species, didn’t I?  By now the people who say “Duh” have already quit reading.  To the remaining curious 8 people who might still be reading this post (really, it’s still a new blog–how many people even know about www.gregmillerbirding.com?), here is another hint:  think of the most common birds.

1.  House Sparrow – has very tiny footprints compared to the other common birds.  Sparrows hop. So tracks should be in pairs.  Do you see pairs of tracks?

2.  American Robin – close to the right size track.  But again, do robins hop, or walk?  They hop. So tracks again would be in pairs.

3.  Mourning Dove – the only common walker in the bunch.  Besides, it is already nesting on the front porch.  This is the most likely culprit.  How do I know these are not pairs of tracks?  Look at the picture.  The tracks are few, but you can make out 1 clear one on top, 2 clear ones in the middle, and 1 clear one on the bottom.  The middle two tracks are the pattern of a walking bird.  From the back toe through the front toe kind of curves toward the center of the bird.

There you have it.  A detective style who-dun-it for the first day of April.  And here’s wishing for warmer weather!