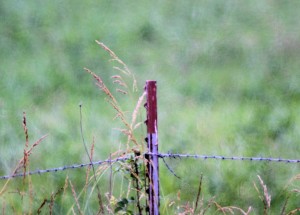 I was very lucky to capture this elusive critter, the invisible race of the Western Kingbird.  Too bad I missed the normal-plumaged Western Kingbird that appeared in this very field the day before.  Sigh.  Such is birding.  But any day out birding is more fun than, say, sitting in a cubicle at work.

We stood at the same place for several hours.  Even though we didn’t get to see the real kingbird (you knew I was kidding, right?), Robert Hershberger, his son Michael, and I did have some consolation prizes. 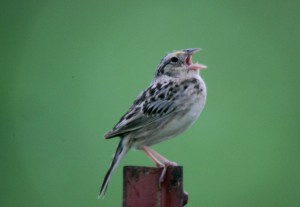 I had my digiscoping setup in place and let Robert focus using his sharp eyes and snap this timely photo of a grasshopper sparrow in the middle of throwing its head back and giving its insect-like call.  Nice shot Robert! 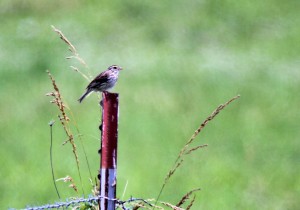 It was fun to see these grassland sparrows in good numbers. 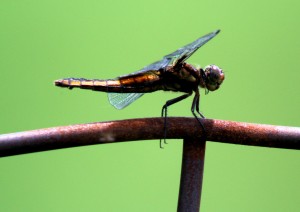 This is a digiscoped dragonfly.  When you spend a few hours in one spot waiting for your target species to show up–well–you end up doing interesting things to bide the time.  Practicing shots through the telescope is a good skill to develop.  I really like the close up of this dragonfly gripping the metal bar.  And this is a juvenile female Widow Skimmer (thanks to Cheryl Harner on the i.d.–I’m still a rank beginner in odonata)