Data was downloaded from eBird (http://ebird.org) for the Lower 48 States, all the Canadian Provinces, and Alaska. The time frame was for all years (1900-2012) and all months and weeks of the year. All data was rolled up at the State & Province level from eBird as of February 22, 2013. This data includes about 6 million checklists.

For “abundance” values, the eBird Frequency of Checklists was used. Note that this is actually just the percent of checklists on which a particular species was recorded. It ignores the actual count of the species per checklist. A checklist with 10,000 Ring-billed Gulls and 1 Iceland Gull will both be recorded as a 1 for both species. Ebird will count the 1 checklist for the Ring-billed Gulls and 1 checklist for the Iceland Gull. So for a smaller sample size one may have data that does not truly represent reality. But the larger the sample size, the closer to reality it becomes.

As a caveat, this data is provided for entertainment. Yes, this is my discaimer. Hopefully it will represent a clearer idea of the best places to find a species. But please use discretion. If something doesn’t seem right, there is probably a reason for it. This report is completely unaltered. Data is reported as it is from eBird. 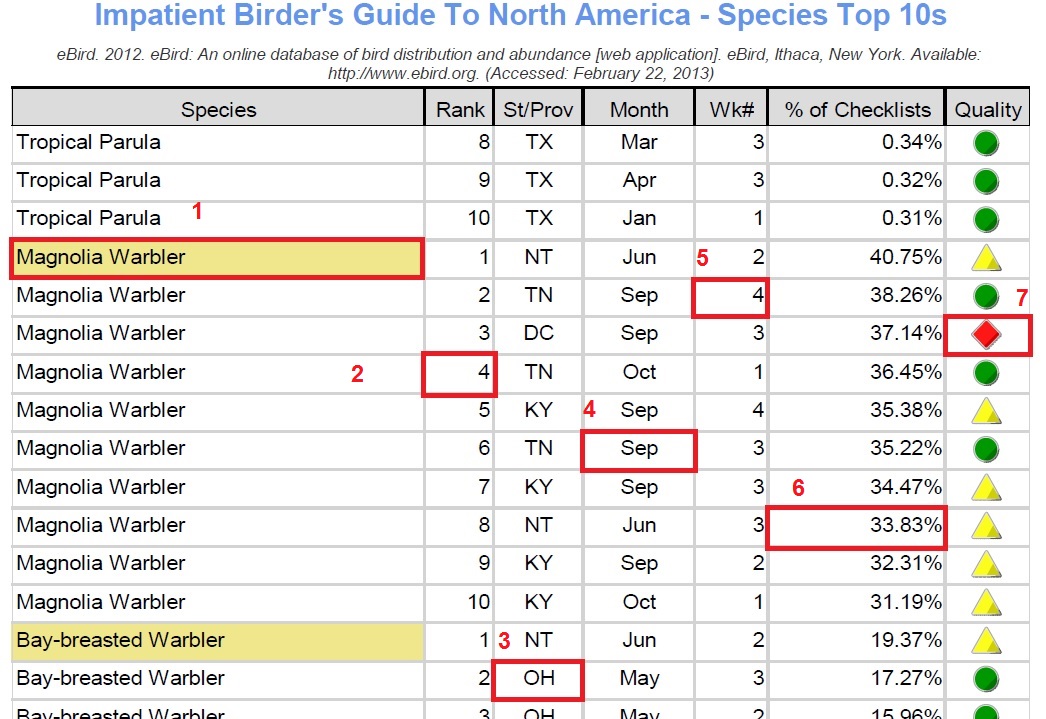 1. Species – The common name of the species from eBird, sorted in taxonomical order

2. Rank – a number between 1 and 10 with 1 showing the “best bet” to see the species according to the Frequency of Checklists value in the second to last column.

4. Month – the first three characters of the month

5. Wk# – a number between 1 and 4 representing the week of the month. This is eBird’s week number. It uses the following calendar dates:

6. % of Checklists – this is the same as eBird’s Frequency of Checklists. It is the percent of checklists for a species by State/Province, Month, and Week Number. Here, the 33.83% means that about 1/3rd of the checklists submitted to eBird for Northwest Territories for the third week of June have one or more sightings of Magnolia Warbler.

7. Quality – relative reliability of the % of Checklists based on the total number of checklists submitted to eBird for a specific State/Province, Month, and Week. Here is the scale: