I left the house at 5:30am to meet birding friend Cheryl Harner near Mansfield.  From there we drove to La Rue, Ohio to try for the Hoary Redpoll that has been visiting a feeder in town.  We were not disappointed.  We found the bird within minutes of our morning arrival.  Pictures of this bird can be found at Steve Jones photo gallery, currently  in the Unsorted category.

We birded Big Island Wildlife Area since we were in the immediate vicinity.  We found several Greater Yellowlegs and both Northern Shovelers and Northern Pintails are still present–two extraordinarily beautiful species of waterfowl.  Tree Swallows were back en force.  They were found flying around all the ponds and even out over the fields.  A few are even staking out nest boxes already, not wasting any time after their arrival a few days ago.

Since we had early success with the redpoll, we decided to make the one-hour drive South to C.J. Brown Reservoir near Springfield, Ohio to try for the reported Eared Grebe.  We stopped at the visitor center at the West end of the dam and inquired about the bird.  We were told it was last seen out by the tower.  You can either navigate a lot of stairs to get up to the top of the dam nearer the tower, or take the long, leisurely flatter walk from the visitor center.  We chose the latter on this sunny (but not warm) day.  We stopped and scanned the waters frequently on our way out to the tower.  Finally, after nearly two hours of scanning our eyes were getting a little bleary-eyed from staring through our scopes.  Having to concede a miss on a rarity chase is never fun, but it happens more frequently than I’d like to admit.  Still, there were plenty of Horned Grebes on the water.  Surely there was a possibility that the Eared Grebe would still be there.  I even fancied the thought that there might be a new Eared Grebe that had flown in overnight.  As I was getting ready for one last scan, POP!  The Eared Grebe surfaced right in front of us!  I have to say the feeling of elation at finding a rare bird is one of the thrills I enjoy about birding.  And the fact that we had put in such effort made the find even more soul-satisfying.  The sunshine on our shoulders didn’t hurt the moment either.  A great picture of this bird can be found on Terri Norris’ blog.

We enjoyed the walk back to the car with excited chatter about how much fun it is to be so lucky.  Hoary Redpoll and Eared Grebe checked off the list, we drove across the road to Old Reid Park to try for the Ross’s Goose.  We got out of the car and there it was–across the water feeding in the grass under a picnic table! haha.  I have never seen a Ross’s Goose under a picnic table.  Actually, I keep a lot of silly lists, but “under a picnic table” is not one of them.  Maybe I should start one after today?  🙂 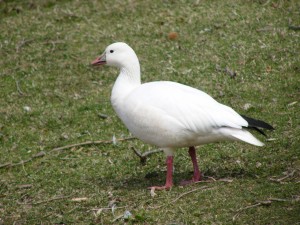 And Dave Lewis (of Birds from Behind fame), if you are reading this post–well, I got a photo that made me think of you.  Here you go.  A Ross’s Goose butt.

What a fun day of birding!